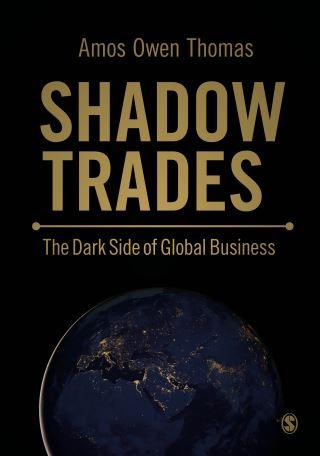 The Dark Side of Global Business

Alongside burgeoning global business, which asserts its legality, ethics and social responsibility, there exists a dark side of shadow trades manifesting various shades of legitimacy.  Not only do the latter’s corrupt practices, dubious supply chains and other illicit operations run in tandem with global business, these borderless trades intersect with economic structures and contribute to systems adopted by corporations, endorsed by neoliberal capitalism, that are often condoned by governments and unwittingly sustained by consumers.  In a very real sense, all of us may be implicated in shadow trades through our work, consumption and citizenship.

Even before we can begin to confront and constrain shadow trades, their business models first need to be identified and analysed in all their networked complexity, interconnectivity with global business and embeddedness within the world economy.  Numerous hard questions need to be raised around enabling circumstances and responsibilities of stakeholders, as well as the winners and losers resulting from business globalisation and socio-economic inequities within and between countries.

Providing background, evidence and analysis on select exemplars of shadow trades, this book provides graduate students of business, plus scholars in the social sciences, together with practitioners and policymakers, consumer groups and civil society, with an indispensable resource for critical engagement.  Only through knowledge gained by research and advocacy for transparency can we begin to shed light on this dark side of global business, enabling all of us to grapple with activism against and collaborative action towards undermining all shadow trades.

Amos Owen Thomas: Amos Owen Thomas was a docent/reader in international business at Stockholm University until his recent retirement and remains associated with the Emerging Markets Research Group of its Stockholm Business School. For almost 30 years he served at eight universities in Australia, the Netherlands, the UK, Namibia, Singapore and Papua New Guinea. In that time, he also taught and researched for short periodsin about 30 countries in East Asia, Central Asia, Middle East, Western Europe and South America. Prior to academia, Amos was employed or consulted for 15 years in business, government and non-profit sectors in a few countries around the Asia-Pacific region.