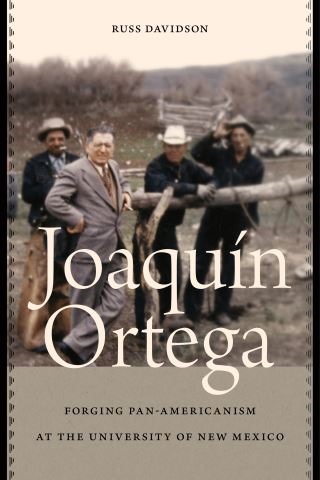 Forging Pan-Americanism at the University of New Mexico

In this important work Russ Davidson presents the first biography of Joaquín Ortega, introducing readers to Ortega’s life and work at the University of New Mexico as well as his close relationship with then UNM president James Zimmerman and other major figures. More than biography, Davidson’s study closely examines the complex relationship UNM has had with Latin America as well as with the Hispanic community in New Mexico and that community’s struggles to have equal representation of culture and education within an Anglo-dominated university and state in the first half of the twentieth century. Ortega’s efforts played a significant role in UNM’s evolution into a culturally diverse place of learning, and his story overlays the history of how ethnic groups began to work together to incorporate Latin American, Pan-American, New Mexican, and borderland studies into the educational fabric of the university at a pivotal time. This long-overdue volume is an illuminating look at the rich and complex history of the university and the communities it serves.

Russ Davidson: Russ Davidson served as a curator of Latin American and Iberian Collections and was a professor of librarianship at the University of New Mexico from 1979 to 2004.