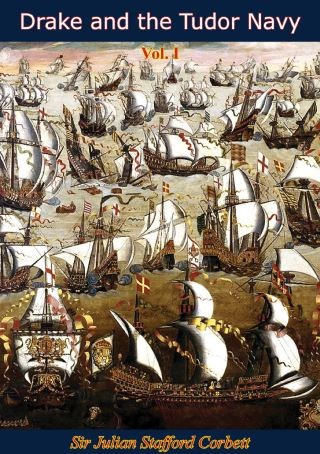 Drake and the Tudor Navy Vol. I

THE NAVAL ART IN THE MIDDLE OF THE SIXTEENTH CENTURY

THE conspicuous technical feature of the maritime revolution which in the sixteenth century transferred the focus of the naval art from the Mediterranean to the Atlantic is the transition from galley warfare to warfare under sail; and the history of that transition, of its causes, its development, and its results, is the history of the rise of the English naval supremacy.

The whole of maritime warfare falls naturally into three periods, each sharply characterised by a generic difference in the ‘capital ship,’ as in the seventeenth century it was happily called—the ship, that is, which formed the backbone of a fighting fleet and which had a place in the fighting line. The first period is that of the galley, beginning in prehistoric times and culminating in the year 1571, at the battle of Lepanto; the second is that of the ‘great ship,’ or ‘ship of the line,’ which was established in 1588 with the campaign of the Great Armada, and reached its highest development at Trafalgar; the third is that in which we now live, the period of the ‘battleship.’ Or, to state the classification in terms of its real basis, there is a period of oars, a period of sails, and a period of steam.