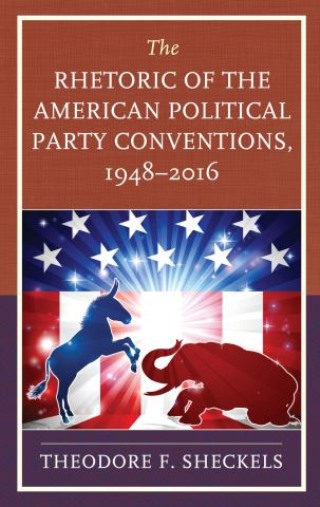 The Rhetoric of the American Political Party Conventions, 1948-2016

The Rhetoric of the American Political Party Conventions, 1948-2016 establishes the rhetorical goals of the thirty-six political party conventions that have taken place since 1948 against the backdrop of the fundamental changes that television brought to the conventions. Theodore F. Sheckels analyzes these conventions to determine whether the gatherings met or failed to meet those goals, including addressing civil rights, unifying divergent wings of the party, celebrating the triumph of a single wing, overcoming dissent inside and outside the meeting hall, overcoming—or capitalizing on—scandal, reconstituting the party after defeats, arguing for change, and advocating for inclusion. Sheckels observes that although speeches are the primary vehicle through which attendees strive to reach these goals, the crucial addresses are not always by the principal players; often, events other than speeches such as negotiations, demonstrations, and media spin can be just as consequential. Sheckels discusses both the similarities and differences in the ways in which the conventions do business and constitute and reconstitute what the political parties are, aiming to persuade the public with rhetorical images and messages. Scholars of communication, rhetoric, political science, and American studies will find this book particularly useful.