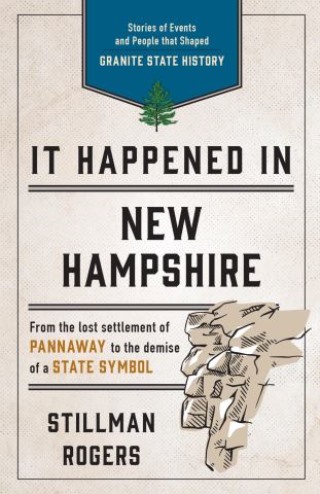 It Happened in New Hampshire

Stories of Events and People that Shaped Granite State History

From a bizarre French and Indian War battle to the state’s first impeachment trial, It Happened in New Hampshire looks at intriguing people and episodes from the history of the Granite State.

Stillman Rogers: Stillman Rogers is a New Hampshire native who has written professionally for more than 30 years. He writes travel columns for newspapers and magazines and also writes a travel blog at https://bestgetaways.wordpress.com. Stillman is the author of several books about New England, including New Hampshire Off the Beaten Path, a guide to the places only the natives know about.

Some of his greatest pleasures are found while traveling the more quiet roads and trails of New Hampshire and New England and finding not only lost or seldom seen places but their history as well. He has written extensively about Eastern Canada, New England, Europea and other destinations. A co-author of Adventure Guide to Canada’s Atlantic Provinces with Barbara Radcliffe Rogers, he and his co-author were the 2010 winners of the Travel Industry of Canada’s Toronto Star Award for Excellence in Media and of the New Hampshire Travel Council Media Award for 2011. His photography has appeared in many national and international publications and monthly in New Hampshire Magazine. With his co-author he also has written numerous travel guides to Portugal, Northern Italy, and other European destinations for European and North American publishers, and his photography is extensively used to illustrate their work. He currently lives in southwestern New Hampshire, where he enjoys travel, gardening, kayaking, and skiing.