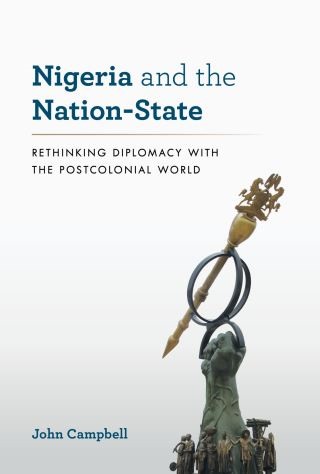 Nigeria and the Nation-State

Rethinking Diplomacy with the Postcolonial World

Nigeria matters. It is Africa’s largest economy, and it is projected to become the third most populous country in the world by 2050, but its democratic aspirations are challenged by rising insecurity. John Campbell traces the fractured colonial history and contemporary ethnic conflicts and political corruption that define Nigeria today. It was not—and never had been—a nation-state like those of Europe. It is still not quite a nation because Nigerians are not yet united by language, religion, culture, or a common national story. It is not quite a state because the government is weak and getting weaker, beset by Islamist terrorism, insurrection, intercommunal violence, and a countrywide crime wave.

This deeply knowledgeable book is an antidote to those who would make the mistakes of Vietnam, Afghanistan, and Iraq—mistakes based on misunderstanding—in Nigeria. Up to now, such mistakes have largely been avoided, but Nigeria will soon—and Campbell argues already does—require much greater attention by the West.

John Campbell: John Campbell is Ralph Bunche Senior Fellow for Africa Policy Research at the Council on Foreign Relations. His books include Nigeria: Dancing on the Brink and Morning in South Africa.