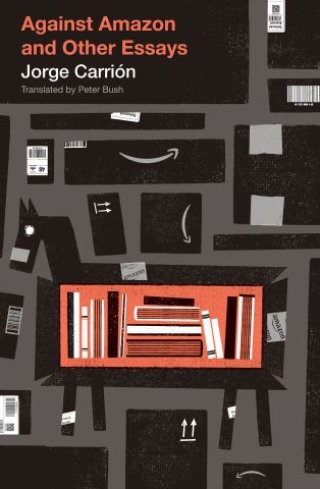 Good bookshops are questions without answers. They are places that provoke you intellectually, encode riddles, surprise and offer challenges … A pleasing labyrinth where you can’t get lost: that comes later, at home, when you immerse yourself in the books you have bought; lose yourself in new questions, knowing you will find answers.

Picking up where the widely praised Bookshops: A Reader’s History left off, Against Amazon and Other Essays explores the increasing pressures of Amazon and other new technologies on bookshops and libraries. In essays on these vital social, cultural, and intellectual spaces, Jorge Carrión travels from London to Geneva, from Miami’s Little Havana to Argentina, from his own well-loved childhood library to the rosewood shelves of Jules Verne’s Nautilus and the innovative spaces that characterize South Korea’s bookshop renaissance. Including interviews with writers and librarians—including Alberto Manguel, Iain Sinclair, Luigi Amara, and Han Kang, among others—Against Amazon is equal parts a celebration of books and bookshops, an autobiography of a reader, a travelogue, a love letter—and, most urgently, a manifesto against the corrosive influence of late capitalism.

Jorge Carrión’s Bookshops: A Reader’s History, published by Biblioasis in 2017, was universally acclaimed and has appeared in thirteen languages. He is the author of three novels, including Los muertos, which won the 2011 Festival de Chambéry Prize for best first novel in Spanish. Carrión’s journalism appears in the Spanish-language edition of the New York Times and many other newspapers in Europe and the Americas. He lives in Barcelona, where he is the director of the creative writing program at Pompeu Fabra University.

Peter Bush's recent translations include Teresa Solana’s The First Prehistoric Serial Killer and Other Stories, his selection of Barcelona Tales, and Quim Monzó’s Why, Why, Why? In press are Josep Pla’s Salt Water and Juan Francisco de Dios Hernández’s Leonardo Balada: A Transatlantic Gaze; in process, Balzac’s The Lily in the Valley and Najat El Hachmi’s Mother of Milk and Honey. He lives in Oxford, UK.