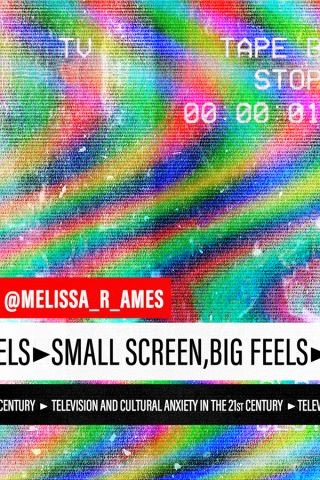 Television and Cultural Anxiety in the Twenty-First Century

While television has always played a role in recording and curating history, shaping cultural memory, and influencing public sentiment, the changing nature of the medium in the post-network era finds viewers experiencing and participating in this process in new ways. They skim through commercials, live tweet press conferences and award shows, and tune into reality shows to escape reality. This new era, defined by the heightened anxiety and fear ushered in by 9/11, has been documented by our media consumption, production, and reaction.

In Small Screen, Big Feels, Melissa Ames asserts that TV has been instrumental in cultivating a shared memory of emotionally charged events unfolding in the United States since September 11, 2001. She analyzes specific shows and genres to illustrate the ways in which cultural fears are embedded into our entertainment in series such as The Walking Dead and Lost or critiqued through programs like The Daily Show. In the final section of the book, Ames provides three audience studies that showcase how viewers consume and circulate emotions in the post-network era: analyses of live tweets from Shonda Rhimes's drama, How to Get Away with Murder (2010--2020), ABC's reality franchises, The Bachelor (2002--present) and The Bachelorette (2003--present), and political coverage of the 2016 Presidential Debates.

Though film has been closely studied through the lens of affect theory, little research has been done to apply the same methods to television. Engaging an impressively wide range of texts, genres, media, and formats, Ames offers a trenchant analysis of how televisual programming in the United States responded to and reinforced a cultural climate grounded in fear and anxiety.

Melissa Ames: Melissa Ames is professor of English and director of English education at Eastern Illinois University. She is a coeditor of Women and Language: Gendered Communication Across Media, the editor of Time in Television Narrative: Exploring Temporality in Twenty-First-Century Programming, and a coauthor of How Pop Culture Shapes the Stages of a Woman's Life: From Toddlers-in-Tiaras to Cougars-on-the-Prowl.