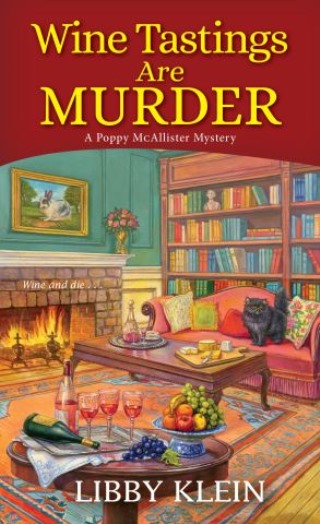 It's vintage Poppy McAllister when the gluten-free baker and B&B owner tries to solve a murder at a Cape May winery . . .

When Poppy and Aunt Ginny agreed to host a Wine and Cheese Happy Hour for a tour group at their Butterfly House Bed and Breakfast on the Jersey Shore, they never anticipated such a sour bunch. Grumpy guest Vince Baker should be in a better mood—he’s filthy rich and on his honeymoon with his much younger wife Sunny, who seems to dote on him almost as much as her high-spirited teacup Pomeranian, Tammy Faye Baker.

But the honeymoon is over when Vince drops dead the next day touring the Laughing Gull Winery. Turns out he's been poisoned, and it seems like everybody on the tour is hiding something. Now Poppy has to put her gluten-free baking on the back burner and bottle up her feelings for the two men in her life while she charges after a bitter killer with a lethal case of sour grapes . . .

“Fans of Chopped will have fun juggling the complicated set of suspects and following a romantic triangle that has yet to be resolved.”
—Kirkus Reviews on Restaurant Weeks Are Murder

Libby Klein: Libby Klein graduated Lower Cape May Regional High School in the '80s. Her classes revolved mostly around the culinary sciences and theater, with the occasional nap in Chemistry. She has worked as a stay at home mom, climbing the ranks to the coveted position of Grandma. She also dabbles in the position of Vice President of a technology company which mostly involves bossing other people around, making spreadsheets, and taking out the trash. She writes culinary cozy mysteries from her Northern Virginia office while trying to keep her cat Figaro off her keyboard. Most of her hobbies revolve around eating, and travel, and eating while traveling.