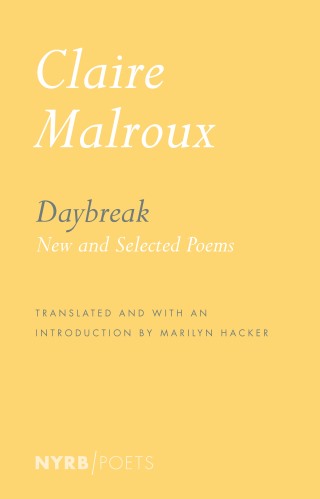 A bilingual collection of poetry, from elegies to poem memoirs, by a revered French master.

For more than four decades Claire Malroux has blazed a unique path in contemporary French poetry. She is influenced by such French poets as Mallarmé and Yves Bonnefoy, but her work also bears the mark, and this is unusual in France, of Anglophone poets like Emily Dickinson, Elizabeth Bishop, and Derek Walcott. A prominent translator of poetry from English into French, Malroux is one of those rare poets whose work is informed by a day-to-day intimacy with a second language in its greatest variations and subtleties. Her poems move between an intense but philosophical and abstract interiority and an acute engagement with the material world. This bilingual selection by the award-winning poet and translator Marilyn Hacker presents Malroux’s oeuvre, from her early lyric poems to an excerpt from A Long-Gone Sun—a poem-memoir of life in southern France before and during World War II—to new and uncollected poems, including an elegiac sequence written after the death of her life partner, the writer Pierre Silvain.

Claire Malroux: Claire Malroux is the author of a dozen collections of poems, including Edge, A Long-Gone Sun, and Birds and Bison, all of which were translated into English by Marilyn Hacker. She is also a French translator of Anglophone poets, notably Marilyn Hacker, Henri Cole, Derek Walcott, Wallace Stevens, and, in particular, Emily Dickinson. She lives in Paris, France.

Marilyn Hacker is the author of fourteen books of poems, including Blazons, A Stranger’s Mirror, and Names; and an essay collection, Unauthorized Voices. Her seventeen translations of other French and Francophone poets include Jean-Paul de Dadelsen’s That Light, All at Once: Selected Poems, and Samira Negrouche’s The Olive Trees’ Jazz and Other Poems. She lives in Paris, France.