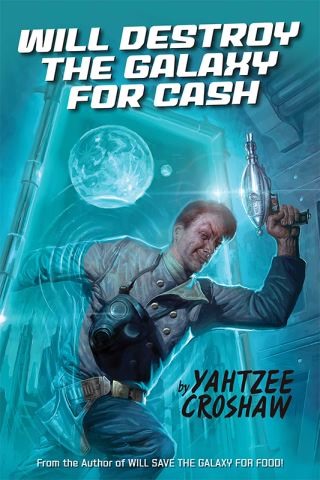 Will Destroy the Galaxy for Cash

Will Destroy the Galaxy for Cash is the follow up tale to Will Save the Galaxy for Food from the mind of writer Yahtzee Croshaw (Mogworld, Jam, Differently Morphous).

With the age of heroic star pilots and galactic villains completely killed by quantum teleportation, the ex-star pilot currently named Dashford Pierce is struggling to find his identity in a changing universe.

Then, a face from his past returns and makes him an offer he can't refuse: take part in just one small, slightly illegal, heist, and not only will he have the means to start the new life he craves, but also save his childhood hero from certain death.

What could go wrong? If you need to ask--you don't know Dashford Pierce.

Before long, Pierce is surrounded by peril, and forced to partner with the very same supervillains he'd spent his heroic career thwarting. But when he's confronted by the uncomfortable truth that star pilots might not have been the force for good, they had intended to be, he begins to wonder if the villains hadn't had the right idea all along...

Yahtzee Croshaw: Yahtzee Croshaw is a British-Australian comedic writer, video game journalist, author, and video game developer. He is best known for his acerbic video game review series, Zero Punctuation, for The Escapist. Before this, Croshaw gained attention in the Adventure Game Studio community for his video games. Croshaw also writes a weekly supplementary column for The Escapist, Extra Punctuation, as well as the video series Judging by the Cover.

Croshaw has published two novels through Dark Horse Comics. The first was Mogworld, published in August 2010.The second, Jam, was released in October 2012. A third is forthcoming. He also cohosts a weekly podcast/Let's Play hybrid series, Let's Drown Out, along with cohost Gabriel Morton.