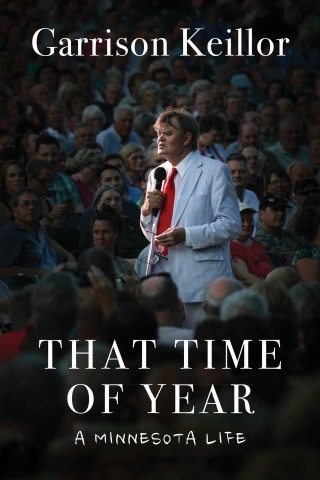 That Time of Year

With the warmth and humor we've come to know, the creator and host of A Prairie Home Companion shares his own remarkable story.

In That Time of Year, Garrison Keillor looks back on his life and recounts how a Brethren boy with writerly ambitions grew up in a small town on the Mississippi in the 1950s and, seeing three good friends die young, turned to comedy and radio. Through a series of unreasonable lucky breaks, he founded A Prairie Home Companion and put himself in line for a good life, including mistakes, regrets, and a few medical adventures. PHC lasted forty-two years, 1,557 shows, and enjoyed the freedom to do as it pleased for three or four million listeners every Saturday at 5 p.m. Central. He got to sing with Emmylou Harris and Renée Fleming and once sang two songs to the U.S. Supreme Court. He played a private eye and a cowboy, gave the news from his hometown, Lake Wobegon, and met Somali cabdrivers who’d learned English from listening to the show. He wrote bestselling novels, won a Grammy and a National Humanities Medal, and made a movie with Robert Altman with an alarming amount of improvisation.

He says, “I was unemployable and managed to invent work for myself that I loved all my life, and on top of that I married well. That’s the secret, work and love. And I chose the right ancestors, impoverished Scots and Yorkshire farmers, good workers. I’m heading for eighty, and I still get up to write before dawn every day.”

Garrison Keillor: Garrison Keillor, born in Anoka, Minnesota, in 1942, is an essayist, columnist, blogger, and writer of sonnets, songs, and limericks, whose novel Pontoon the New York Times said was “a tough-minded book . . . full of wistfulness and futility yet somehow spangled with hope”—no easy matter, especially the spangling. Garrison Keillor wrote and hosted the radio show A Prairie Home Companion for more than forty years, all thanks to kind aunts and good teachers and a very high threshold of boredom. In his retirement, he’s written a memoir and a novel. He and his wife, Jenny Lind Nilsson, live in Minneapolis and New York.