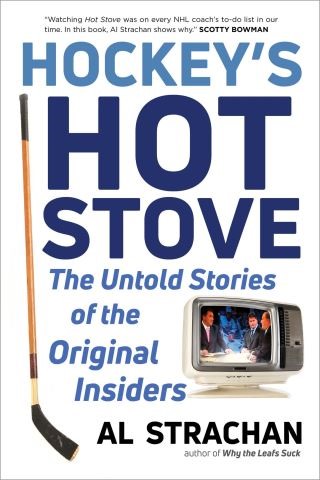 The Untold Stories of the Original Insiders

Stories from behind the scenes of one of hockey’s longest running and most popular broadcasts, Hockey Night in Canada’s Satellite Hot Stove, from an insider who’s seen it all.

For more than twenty years, hockey fans tuned in during intermission on Saturday nights to watch one of the most popular segments in the game’s long broadcasting history. They’d hear news from around the league, the latest rumours and gossip, and—of course—some of the most controversial opinions of the day.

No, we’re not talking about Coach’s Corner.

The Satellite Hot Stove was a revolutionary show for talking about the game we love. Here, during the second intermission of the first game of every Hockey Night in Canada broadcast, pundits, and insiders would convene in studios across North America—in arenas and other locales—to discuss the biggest topics. Hot Stove was the best place to get news, opinions, and a good laugh.

And Al Strachan was in the middle of it all. A bestselling author and award-winning sports journalist, he has been writing and talking about hockey for more than forty years. As a regular TV pundit on Hot Stove, he witnessed the most exciting and talked-about episodes in the modern game. And more than once, his unfiltered, say-it-as-it-is style added controversy of its own, too. In this new book, he relives the best stories of his long career, from working with some of the biggest personalities, on and off the ice, to the hijinks that went on behind the cameras.

From embarrassing himself in front of Scotty Bowman, to cooking up a plan with Wayne Gretzky to save hockey, and frank conversations with Ken Dryden and hockey’s elite, Hockey’s Hot Stove delivers all new hockey stories you won’t hear anywhere else.

Al Strachan: Al Strachan is a journalist and former columnist for the Toronto Sun, The Globe and Mail, and The Montreal Gazette. He was a regular commentator on Hockey Night in Canada, The Score, and The Satellite Hot Stove. Strachan has been writing about hockey and hanging out with NHL players, coaches, general managers, and owners for more than forty years. He is a member of the media section of the Hockey Hall of Fame. Connect with him on Twitter @Winsford99.